Water-based and solvent coatings have significant various rheological behavior and the analysis of their flow curve in function of shear rate variation enables to perfectly adjust their formulation in order that user has the same easy of useand also to limit the flowing too.

The issued Flow curve shows influence of shear rate on the viscosity of sample.

The speed rampe nables to follow evolution of viscosity from as we left from the pot (D < 2 s-1) until a shear rate closed to this of application (1000 s-1) and then compare quickly and efficiently the products between them. 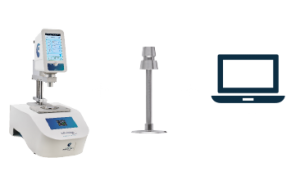 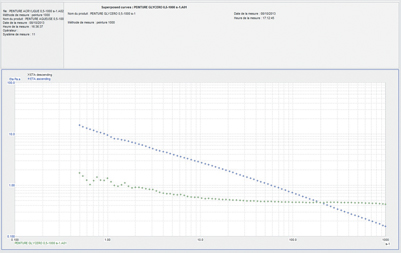 Solvent coating has a relatively flat profile, then its viscosity doesn’t change so much between rest state and application shearing.

The Water-based coating viscosity decrease a lot with a 6 times more higher at rest state and become so fluid through the shearing in order to give a 3 times lower viscosity under application (viscosity at 1000 s-1) than solvent one.

This shear-thinning behavior assure one application facility and warranty a good rest structure, symbolized by the Yield Value
of this product as indication of limit of flowing.